Skip to content
Home » Blog » Business Mindset » How to Get Your Goals to Stick!
Previous Next

How to Get Your Goals to Stick! 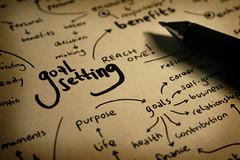 I  know that the more we engage all our senses (not just our ears) when we hear new material, the more it helps us to anchor that new material within us. I also know that anchored information will more likely be used when we return and get into our daily business activities.

When you decide to set a new goal in your small business, how do you do it? Do you quietly down and make a list? Do you write out an affirmation? Do you simply think to yourself one day while you’re in the car “I need to do thus-and-such” and set out to do it? Whatever your method, you can have a higher degree of success to sticking to your new goal if you include as many of your senses as you can to help you along and using EFT.

One that is popular right now that has worked for me is called Emotional Freedom Techniques (EFT).   EFT is often used to change our emotional reaction to a certain situation. For instance, if nervous speaking in front of people, you can learn to use EFT to say affirmations and tap yourself on specific points of the body. EFT is nicknamed “tapping” because you actually do tap yourself repeatedly at specific spots as you are saying the sentences you construct about your goal the change you desire. I’ve used EFT more than once and if it is used consistently, it has worked for me.

I’m going show you how to combine EFT Tapping and using your senses to make your new goal stick, though. Using your sensory is often called VAK, which stands for Visual/Auditory/Kinesthetic. I like VAK because it is another way to become an embodied entrepreneur. Simply put, that means that you are engaged in your work with your heart, soul, mind AND body – and you are sure to be quite successful if you can achieve that!

First thing is to set a goal and put the power of VAK behind it, here’s what you do:

1. Write your goal down.

2. Close your eyes, and ask yourself “what will you  notice hat will let you know you’ve attained your goal?” Even better, you can give this question and the following ones to a friend and ask them to walk you through this and answer to her, out loud. Take a breath or two, and see what pictures you get, what you’ll see when your goal is met. You will probably get more than one vision. Open your eyes, and write each of them down.

3. Again, close your eyes and ask yourself “what will people be saying to you once you’ve reached the goal?” After you’ve recorded your answer (or had your friend record it for you), try asking yourself “what will people say about you once you’ve reached your goal?” And finally, ask what you would say to yourself when your goal is reached. Record your answers, or have your friend do it for you.

4. (This is my favourite part!) Now, close your eyes again. Ask yourself how you will feel when you’ve reached this new goal. Really take some time to let this sink in, and see what feelings arise in you. Once you have a good strong feeling going, ask yourself about the color, shape, texture, and even the temperature of that feeling. Finally, ask yourself where the feeling is located in your body. Record all your answers. Don’t rush yourself; give yourself time to really get into the feeling of reaching this goal.

5. Finally, ask yourself what belief you could state about yourself that will help you get this goal. For instance, you don’t deserve to charge more for what you do in your business, could you create a belief about yourself that you are able to easily turn your attention to money is just energy and like attracts like? Work on this replacing your current belief that it is “impossible to charge more money for what I do” or “my work contributes to a person’s well being and if they feel  better this is priceless”.   In other words, replace your negative self-talk with a positive belief in yourself as someone who is capable of doing what you want to do.

6. Be sure to ask yourself if you foresee any reason NOT to reach this goal. If you secretly think that charging more is going to be risky or bad you will not reach your goal of transforming the planet because money and spirituality does not work; until you have put that belief to bed.  EFT is great for removing beliefs around spirituality and money.

We almost always have a secret reason that we don’t want to do what we say we want to do. I say I want to improve my auditory Spanish skills, but secretly I don’t want to put in the extra half hour a day to do that. So, of course, I don’t! Bring your secret reasons up into your consciousness, and you’ll go a long way to helping yourself get that goal.

The Meridian Sequence is to Tap about 5-7 times on each of the following energy points (while repeating your goals):

Repeate daily.  It is really simple!

That’s it for now.  The point here is to create a outline around you that helps support you in all your senses. If you have a goal to grow a rose garden, you can close your eyes and envision the layout, the sunshine, the colors, and the smells for sure. The more you can embody your goals for your business, the more you’ll be able to make it stick. Let me know how it works for you.

The ultimate purpose in life, at least from my experience, is to gain alignment with one’s heart’s soul truth, breaking the resistances and maintaining a mindset that creates what you are here to do. There is always choice and possibilities and now it is time for heart felt individuals who may be struggling to fulfill their dreams and desires to open their unstoppable path to creation. Your truth will bring clarity - from ego to heart; from poverty to wealth; from hate to love; from fear to peace Whatever that is it must always be congruent and messaged with your vision, goals, values, gifts, talents, skills and your purpose and passion…where there is an unwavering commitment to continually pave it forward.