Mindfulness and Tango – Passion and Possibilities 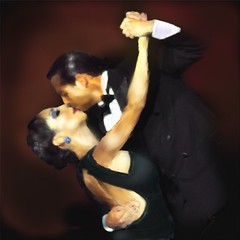 My husband and I recently saw the movie “Forever Tango!”  It was a great movie-passionate dancing, stirring music, spectacular costumes. But I wanted to know more about how the dance form started, so I did a little research on the history of tango.

Despite the fact that we tend to consider tango to be a dance performed in high society while wearing gorgeous dresses, the roots of this dance are decidedly low class.

In the 1880s, Buenos Aires attracted immigrants from around the world–Germans, Italians, Africans–as well as those moving to the burgeoning city from the pampas in the Argentine countryside. These new arrivals brought their cultures with them, and as the lonely working men and women longed for companionship as well as a bit of home, a new form of music, dance and culture evolved.

Though many still argue the exact origin of the word “tango” it is generally considered to be derived from a word describing the drumming music of the African immigrants. The Germans added the accordion, and a new craze in European dancing–a scandalous new position in which the man actually rested his arm on the back of his woman partner!–trickled into the gatherings of those who were alone and seeking a way to release their despair and express their passion.

The only women in Buenos Aires willing to dance in this provocative style at that time were the prostitutes, so tango was developed by immigrants looking for love in the houses of ill repute. Later, men actually practiced dancing the tango with other men so they could become skilled enough to impress the wealthy European ladies who made visits to the exciting, prosperous country of Argentina after the turn of the century.

In fact, Argentina was so wealthy at that time that those in Paris and London would refer to someone with considerable means as being “rich as an Argentinean.” Tango became a dazzling form of entertainment among the rich and famous of Europe, and eventually this higher status was conferred upon the smoldering dance in its native Buenos Aires.

Of course, there are plenty of examples of dances that were once considered too risque for the general public–the Charleston, the twist, hip-hop–but few have risen from the lowest class to the highest in such spectacular form.

“What does this have to do with mindfulness?” you are asking.

You see, tango was embraced–eventually– once people were able to view it in a new way. The same bawdy dance carried out in dark brothels in Buenos Aires was considered sophisticated and daringly modern once it was dressed up and presented at Paris cocktail parties.

Mindfulness helps us see the world in a nonjudgmental way. It inspires creativity as well–we can see possibilities that wouldn’t be so obvious if we were looking through that veil of judgment.

What if you saw the world–and yourself– as simply full of possibilities?

Learning to watch our responses is a lot like dancing the tango–we need to be fully present. We need to be brave enough to look really, really closely.

If we don’t focus, we’re likely to get kicked in a rather personal place. If we are tuned in, we will flow effortlessly with little resistance and tremendous grace.

Mindfulness helps us move through life with awareness, creativity, and a certain flair that says “I’m paying attention.”

Take the time to develop a business plan that feels authentic, and then develop a clear plan of implementation. When you understand that the foundation of business is to share value with someone else, you come full circle with a heart-centered spiritual practice.      Her blogs, includes inspirational articles showing you how to use your business to create your ideal lifestyle.  Grab the full article, “the Top Ten Reasons  your Spiritual Business is Keeping you Disadvantaged and Broke , at www.passionandpossibilities.com

Like us on Facebook  as we are   soon releasing an e-book/workbook that will get your head and heart thinking seriously connected.